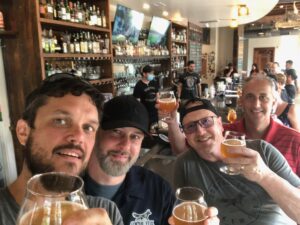 Social Fox Brewing started off as a home brew club in 2015. Mike Greene and Kevin Keyes brewed numerous styles of beers and won various medals at local home brew competitions. With the changing of Georgia beer laws, Mike and Kevin decided that it was time to take their brewing to the next level. They teamed up with Scott Norwood  an award-winning home brewer since the early 90s, who also decided that it was time to go pro. The three shared plans, visions and goals and decided a partnership would be beneficial. They formed an LLC, 400 North Brewing, in order to move forward with their plans to open a microbrewery.

The team purchased a 1-barrel pilot brew house in order to start producing large quantities of home brew for competitions and sampling events. They used these events to spread the word about 400 North Brewing and their plan to open a craft brewery in Gwinnett county. After a year of planning and scouting out various locations the team was introduced to the Director of Economic Development for the City of Norcross.

Representatives from the city asked the team to consider Norcross as a location for the brewery. The Economic Development team assisted in locating a building and offered guidance to navigate the ordinances and local permitting process. The warehouse located at 20 Skin Alley was selected as the prime spot for a small brewery footprint. Not only was the building located in the heart of downtown Norcross, it had an amazing mural painted on the outside.

The mural entitled, “Tumblefield” is the cornerstone to the alley. The city asked that we preserve and keep the mural in place and given the location of Downtown Norcross the name “400 North Brewing” no longer applied. Several options were considered until the perfect name was chosen. Social Fox Brewing was then formed.

Stay in the Know